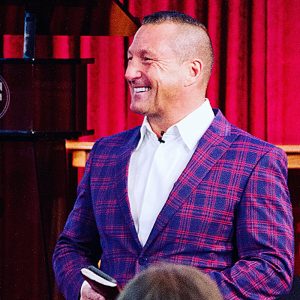 Reverend Chris D’Amico is the president and founder of CDM International of Sarasota, Florida.  He is a 1985 graduate of the University of Buffalo where he graduated with a B.S. in Business management.

While at the University He was a four year starter at wide receiver for the UB Bulls football team. Over his four year career, he broke seven school records, was elected first team All ECAC in his junior and senior year at wide receiver. He was also elected All-American at the wide receiver position. In 1984 he was awarded the honor of Male Athlete of the year by the Police Athletic League. In 2001 he was inducted into the Hall of Fame at the University of Buffalo for his career accomplishments.

Upon graduation he had three professional football invitations with the Buffalo Bills, Dallas Cowboys and Tampa Bay Buccaneers.

Turning down the professional invitations, he felt the call of God to public service.  He then attended Rhema Bible College in Broken Arrow, Oklahoma under the leadership of Kenneth Hagin, graduating in 1987.

After graduating from Bible College, Reverend Chris served faithfully over eight years in the local church in associate roles in three different states in the USA.

He later moved to Tulsa, Oklahoma and incorporated Chris D’Amico Ministries and began traveling to over 30 states in the USA and now to many nation’s of the world in person and by way of special zoom meetings.

In June of 2021, Reverend Chris received an honorary doctorate from Life Christian University.

What Others Are Saying

“Thank you Chris for being a man who honors leadership and understands spiritual authority. You have brought the Word to us in a concise manner with God’s anointing and precision. Our lives were enriched as you imparted revelation and truth. We sensed the fire of God and the power of God working in your life as God touched us through you. Your being here has encouraged us with life and the pursuit of passion with the Lord.”

“We speak increase and blessing to Chris D’Amico Ministries. Everywhere we go, we hear good things about you. We know God is doing great things through you!
Love and Blessings.”

“I would like to recommend to you the ministry of Chris D’Amico. I am always looking for ministries of excellence to bring into our church. Recently we had Chris minister in our church and it was outstanding. Our church was blessed by the teaching and the ministry time at the end of the service. Chris moved very accurately in the Gifts of the Spirit. We thank God for people like Chris that will preach the Word of God in an uncompromising manner.”

“I know Chris to be a man of integrity and high ministerial values. I recommend him unquestionably. He is an outstanding asset to the ministry.”

“In my opinion Chris D’Amico is a stand out among his peers in regard to excellence of ministry. Chris receives the highest recommendation from this ministry concerning both his character and ability to effectively minister the gospel.”

To invite Chris to speak at your service, conference or special event, please fill out the form below.

Consider supporting Chris D'Amico Ministries as we change lives through the Holy Spirit with signs and wonders following.